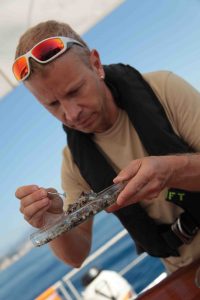 From colonization to biodegradation of plastic in the Oceans : a big step forward for bacteria

The biodegradation of plastics in the marine environment is a field of research which meets many expectations, both for evaluating the fate of the plastics which pollute our oceans, but also for the design of the so-called “biodegradable” polymers. The sea is the final receptacle for all wastes. Plastics have become the most common form of debris in the oceans and are currently considered a major global pollution problem. At sea, plastic fragments are quickly colonized by a wide variety of microorganisms: the “plastisphere”. The diversity of species that colonize plastics is particularly abundant. But can these bacteria degrade plastics in the marine environment? The standards and definitions of the “biodegradability” of polymers are often poorly adapted to the specificities of the marine environment. There is great pressure on the scientific community to provide indications of the biodegradability of different materials, while this issue is relatively recent in terms of the advancement of basic research. Evidence of biodegradation is often carried out under laboratory conditions, which do not reflect the reality of the marine environment. Many questions remain: what is the rate of biodegradation of a polymer in the marine environment? Is there a decoupling between the processes of abiotic degradation (abrasion, UV, salinity, …) and the biodegradation? How dependent is the biodegradation of the polymer properties? Is there a great diversity of marine bacteria capable of degrading polymers? What are the molecular mechanisms involved in biodegradation? To answer these questions, it is essential to decompartmentalize research in this field, carried out at both academic and industrial level, and touching on various scientific disciplines (physics and chemistry of polymers, microbiology, microbial ecotoxicology, oceanography, modeling, etc).